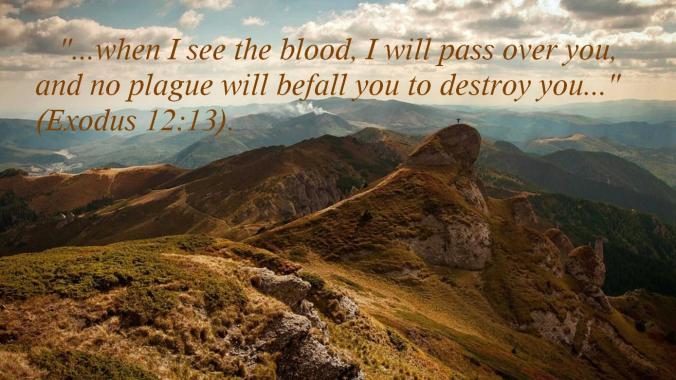 Evidences of Faith:
The Blood of the Lamb

In the May installment of Evidences, we looked at the exodus of the Israelites from the land of Egypt. In particular, we focused on the crossing of the Red Sea, and how that crossing foreshadowed the New Testament concept of baptism. This month, we will focus on another event which God brought about in the course of freeing His people from their slavery: the tenth plague.

In order to convince the Egyptians of His deity, engrave the fear of Himself on their hearts, make Himself known to all peoples, and to convince Pharaoh to let Israel go, God sent a series of plagues upon the Egyptians. The tenth — and final — of these plagues was the most terrible of all:

This would be the plague to end the plagues, the one that would finally cause Pharaoh to send Israel out of Egypt. Moreover, it was yet one more instance where God showed that He had chosen a specific people to be His own:

“But against none of the children of Israel shall a dog move His tongue, against man or beast, that you may know that the Lord does make a difference between the Egyptians and Israel” (Exodus 11:7).

God had determined that He would shield His people from the death of their firstborn. However, the Israelites would have to do something in order to avail themselves of this protection.

In chapter twelve of Exodus, God instructed the Israelites to conduct a special sacrifice. On the tenth day of that month, which was henceforth to be the first month in their calendar, each household was to choose a lamb. If the household was too small to eat the whole lamb, then two neighbors could share a lamb. It could not be just any lamb, however:

“Your lamb shall be without blemish, a male of the first year. You may take it from the sheep or from the goats” (Ex. 12:5).

While it could be either sheep or goat, it had to be without spot. They were to keep this lamb for four days:

“Now you shall keep it until the fourteenth day of the same month. Then the whole assembly of the congregation of Israel shall kill it at twilight. And they shall take some of the blood and put it on the two door-posts and on the lintel of the houses where they eat it” (Ex. 12:6,7).

It is interesting to note the phrasing of verse six; it is as if the entire people Israel were coming together to kill one lamb. We know from what has already been said that many lambs were to be sacrificed, and so to say that “the whole assembly…shall kill it” seems enigmatic. It is also interesting to note the time of day. If your Bible has marginal notes, it may point out that the ancient Hebrew expression rendered twilight literally means, “between the two evenings.” But more importantly, there is the blood: why put it around the door?

“For I will pass through the land of Egypt on that night, and will strike all the firstborn in the land of Egypt, both man and beast; and against all the gods of Egypt I will execute judgment: I am the Lord. Now the blood shall be a sign for you on the houses where you are. And when I see the blood, I will pass over you; and the plague shall not be on you to destroy you when I strike the land of Egypt” (Ex. 12:12,13).

This is why the meal is called the Lord’s Passover (verse 11). God did not enter the houses where the lamb’s blood was on the doorposts and lintel to destroy their firstborn, but passed over them. Thus God’s people would be saved from the death of their firstborn children by the blood of the lamb.

God commanded the people to observe the Passover perpetually, year after year, to remind themselves that it was He who had freed them from slavery and made them into a nation. Along with the Passover, there was also to be a week-long feast. As you recall, the Passover was sacrificed on the fourteenth day of the first month. This day would also mark the beginning of the Feast of Unleavened Bread:

“In the first month, on the fourteenth day of the month at evening, you shall eat unleavened bread, until the twenty-first day of the month at evening. For seven days no leaven shall be found in your houses, since whoever eats what is leavened, that same person shall be cut off from the congregation of Israel, whether he is a stranger or a native of the land” (Ex. 12:18,19).

So, no leavened bread could be eaten with the Passover lamb, or for a week thereafter. The Israelites, God’s first covenant people, were to keep this feast perpetually. Thus it would be an ongoing reminder to them that God had saved them from their bondage to the Egyptians.

While there are many instances of God saving His people from various kinds of predicaments recorded in the Bible, the central problem is always sin. This is a problem we all face, for all have sinned (Romans 3:23). And it is a very serious problem, “For the wages of sin is death…” (Romans 6:23). Moreover, it is a problem which we are helpless to rectify on our own, since everyone who commits sin is a slave of sin (John 8:34). In the first epistle of John, we are told that God is all light, purely good, with no darkness, or evil, in Him. Therefore, we who have sinned cannot have any part with Him, because we walk in darkness. Our sins separate us from God, and therefore also from heaven and eternal life, and there is nothing we can do on our own that can take those sins away:

“But if we walk in the light as He is in the light, we have fellowship with one another, and the blood of Jesus Christ His Son cleanses us from sin” (1 John 1:7).

If we believe in Jesus, and thereby live according to the example He set for us, God will call us His people, and deliver us from the greatest predicament of all:

“For when we were still without strength, in due time Christ died for the ungodly. For scarcely for a righteous man will one die; yet perhaps for a good man someone would even dare to die. But God demonstrates His own love toward us, in that while we were yet sinners, Christ died for us. Much more then, having now been justified by His blood, we shall be saved from wrath through Him. For if when we were enemies we were reconciled to God through the death of His Son, much more, having been reconciled, we shall be saved by His life” (Romans 5:6-10).

So, by the resurrection of Christ, by His victory over death, we have hope of everlasting life: if we have first been reconciled to God by His blood. It is the blood of Christ that frees us from our bondage to sin, and saves us from the death that results.

So then, just as the blood of the unblemished lamb saved the Israelites from the death of their firstborn, so also the blood of Christ saves all of His disciples from the consequence of their own sin: death. The sacrifice of Christ is what allows the just God to pass over His people when He executes judgment upon mankind for their innumerable sins…

“…for all have sinned and fall short of the glory of God, being justified freely by His grace through the redemption that is in Christ Jesus, whom God set forth to be a propitiation by His blood, through faith, to demonstrate His righteousness, because in His forbearance God had passed over the sins that were previously committed, to demonstrate at the present time His righteousness, that He might be just and the justifier of the one who has faith in Jesus” (Romans 3:23-26).

Because of the blood shed on the cross, those who are accounted faithful in Jesus Christ will not receive the punishment for their sins, but will receive life by the grace of God. Thus God has delivered us by a truly great deliverance.

Just as we saw that Exodus 12:6 is written as though there was only one lamb for the entire people of Israel, so we truly have only one Lamb who was sacrificed for us. We also noted that the original Passover was sacrificed at twilight, and that the Hebrew expression literally means “between the evenings.” With that in mind, consider what happened when Jesus was on the cross:

“Now when the sixth hour had come, there was darkness over the whole land until the ninth hour. And at the ninth hour Jesus cried out with a loud voice, saying, ‘Eloi, Eloi, lama Sabachthani?’ which is translated, ‘My God, My God, why have You forsaken Me?’ Some of those who stood by, when they heard it, said, ‘Look, He is calling for Elijah!’ Then someone ran and filled a sponge full of sour wine, put it on a reed, and offered it to Him to drink, saying, ‘Let Him alone; let us see if Elijah will come take Him down.’ And Jesus cried out with a loud voice, and breathed His last’ (Mark 15:33-37).

The ‘sixth hour’ would have been about twelve noon, and the ‘ninth hour’ about three p.m. So, there were three hours of darkness before Jesus’ death, but normal evening did not begin until about three hours after His death. There were, in effect, two ‘evenings’ that day, and Jesus died between them. The Passover is a vivid foreshadow of the sacrifice of Christ.

The apostle Paul refers to this in the context of instructing the church at Corinth to put away from themselves a man who, though called a Christian, would not repent of his sin. The Corinthian brethren, rather than feeling pain when considering the spiritual state of their fallen brother, were evidently proud of their capacity to embrace him even in his sin, and so Paul rebukes them:

“Your glorying is not good. Do you not know that a little leaven leavens the whole lump? Therefore purge out the old leaven, that you may be a new lump, since you truly are unleavened. For indeed Christ, our Passover, was sacrificed for us. Therefore let us keep the feast, not with the leaven of malice and wickedness, but with the unleavened bread of sincerity and truth” (1 Corinthians 5:6-8).

Remember the Feast of Unleavened Bread? Just as God’s first covenant people kept that feast beginning with their Passover sacrifice, so also do we. They kept their Passover by killing a lamb; our Lamb has been sacrificed for us once and for all. They kept their Feast of Unleavened Bread by eating that bread; we keep ours by being that bread: by purging out the leaven of sinful attitudes, and living with pure hearts before God.

We have, then, yet another clear example of how the books of the Old Testament anticipate the events and truths recorded in the New Testament. In this present case, the book of Exodus was written about fifteen hundred years before the New Testament was begun, yet somehow the author could foreshadow the cross of Christ. Sure, one may dismiss this as mere coincidence, but then what about the prophecy of Moses, discussed in last month’s issue of the Watchman? Or the bronze serpent (June issue)? Or the crossing of the Red Sea (May issue)? Or the near-sacrifice of Isaac (February)? At some point, we must reject the notion that this is all chance, and admit that there is a pattern. And that pattern leads us to the inescapable conclusion that the Bible is indeed from God.