Don’t Allow Anyone to Steal Your Heart!

There were a number of sad and tragic events in the life of King David.  A series of events began with his sin with Bathsheba.  His adultery with her led to deceit, and ultimately, the murder of her husband, Uriah.  After David had Uriah killed and had taken this man’s wife, God told him: “Now therefore, the sword shall never depart from your house….Behold, I will raise up adversity against you from your own house” (2 Sam. 12:10-11).  Soon his troubles and heartaches began.  His infant son with Bathsheba died; his son Amnon raped his daughter, Tamar; his son, Absalom, murdered Amnon (2 Sam. 12-13).

Surely, one of the most heart-breaking developments in the life of David was when his son, Absalom, turned and rebelled against him. He committed treason against his own father — “Absalom stole the hearts of the men of Israel” (2 Sam. 15:6).  When having to go to battle against his son, David instructed his commanders to “Deal gently for my sake with the young man Absalom” (2 Sam. 18:5).  As the battle raged, David was asking, “Is the young man Absalom safe?” (2 Sam. 18:29,32).  When word came to David that his son had been killed, he cried out, “O my son Absalom — my son, my son Absalom — if only I had died in your place!  O Absalom my son, my son!”  (2 Sam. 18:33).  This has to be one of the saddest scenes that we read about in the Bible.

But let’s go back to the beginning when Absalom started stealing the hearts of the people.  He very cunningly became trusted and more popular than David.  He worked hard at it; he looked for troubled people; he reached out to them; he took a personal interest in them; he sympathized with them; he never personally attacked his father directly, he just promised to do better (2 Sam. 15:1-12).

This reminds me of what has been happening among God’s people today, especially to some of the young.  Over the past few years, I have learned of congregations being affected by this type of thing.  A young preacher (not always a preacher) comes in with false ideas, endears himself to the group, especially college students and young married couples, influences them and takes them away with his false teachings.  Just recently, a friend called and told me of something similar to the aforementioned scenario that happened where he worships.  A young preacher came in and preached the truth for about three years, all the while developing a close relationship with the young people.  Then he started teaching error, split the church, and took about 40-50 with him — a dangerous trend that has been developing.  We have great young people faithfully serving the Lord today, but some are being led astray.  Yes, there are problems that often exist, but some have reacted by going to the extreme with bitterness toward those who are sincerely seeking to hold fast to the ancient landmarks of faith — the “old paths” of truth.

Here are several examples of erroneous teachings that some are promoting in different parts of the country that have come to my attention over the past few years.   (1)  A person is saved or “born again” before baptism — that baptism is not essential to salvation.  They are using typical, Calvinistic, denominational arguments that teach salvation by “faith only.”  (2) Approved apostolic examples are not binding in establishing Bible authority for what is allowed or not allowed in the service of the Lord.  They are saying that books such as Acts are to be viewed simply as a narrative, not as an example for us to follow today.  (3) Social drinking is justified and accepted.  (4) Distorted views are held on worship — particularly the Lord’s Supper.  Sadly, there are brethren who are being influenced and led astray by these false teachings.

In principle, the actions of those who are teaching some of the above errors just cited are much like Absalom who “stole the hearts of the men of Israel.”  Thus, we all need to be alert to this potential problem.  We must be careful not to become bitter and unhappy, allowing ourselves to become vulnerable to false teachers and some of the dangerous trends that are occurring.  Much of what has been mentioned feeds off bitterness and dissatisfaction toward the truth and God’s people.  Brethren are being led astray!  The Apostle Paul said, “Watch, stand fast in the faith” (1 Cor. 16:13).  The Apostle John said, “Beloved, do not believe every spirit, but test the spirits, whether they are of God; because many false prophets have gone out into the world” (1 Jn. 4:1).  Our hearts belong to God!  We are to love, serve, and obey Him with all our hearts.  Brethren, especially those of you who are young, don’t allow anyone to steal your heart!

“When I consider Your heavens, the work of Your fingers, The moon and the stars, which You have ordained; What is man that You take thought of him, And the son of man that You care for him?” (Psalm 8:3,4, NASB).
——————– 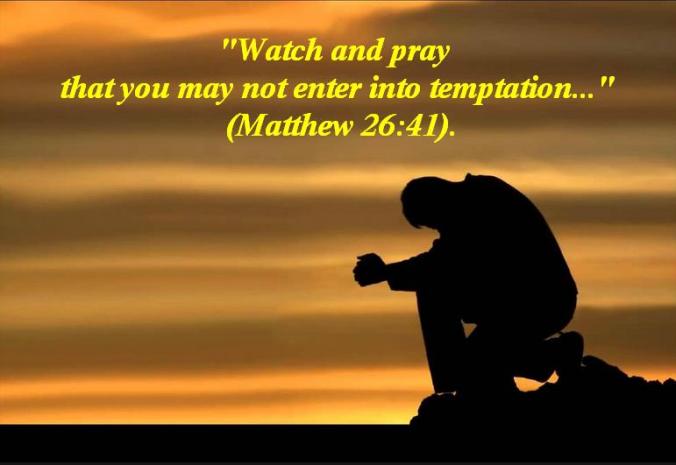 How to Defeat Temptation

Whenever we think of something as a temptation we consider it as evil. The original Latin could suggest something good or bad, but the evil sense has taken a predominate role in its definition. The idea of temptation is rooted in the challenge of character. Trials rightly faced are harmless, but wrongly met become temptations to evil. Overcoming temptations is the focus of a daily walk in a world given over to the indulgence of temptations.

James exhorts us to “count it all joy when you fall into different kinds of temptations” or “trials” (James 1:2). Barnes said, “Regard it as a thing to rejoice in; a matter which should afford you happiness. You are not to consider it as a punishment, a curse, or a calamity, but as a fit subject of felicitation (act of congratulating).” Paul reminds us that nothing will be put upon us that we cannot overcome with the power of the Lord. “No temptation has taken you but what is common to man; but God is faithful, who will not allow you to be tempted above what you are able, but with the temptation also will make a way to escape, so that you may be able to bear it” (I Corinthians 10:13). Our prayers are to be laced with exhortations of faithfulness. Jesus taught His disciples to pray, “Lead us not into temptation, but deliver us from the evil” (Matthew 6:13).

Jesus did not say look and pray; He said watch and pray. The word “watch” carries with it the idea of vigilance and being alert. Often we see temptation and invite it in. Being watchful is being careful of what we are allowing to happen in our lives. Many things in life we cannot control, but allowing that thing to remain and become a temptation is when sin happens. In defining sin, James said that temptation comes about when “each one is tempted by his lusts, being drawn away and seduced by them. Then when lust has conceived, it brings forth sin. And sin, when it is fully formed, brings forth death” (James 1:14-15).

Being watchful about temptation is to remove those things that would bring about temptation. We are to pray for the Lord not to lead us into temptation (Matthew 6:13) but we do not need to go running into it either. To the discerning mind, sin is easily defined by watching out for it and being aware of the dangers of giving in to temptation. As Barney Fife would say, “Nip it in the bud.” Good advice.

The second pillar of strength to overcome temptation is vital: prayer. Watching for temptation helps us identify sin, but prayer helps us defeat sin. Prayer is powerful (James 5:13-18). Prayer made the sun stand still (Joshua 10:12-14); the dead rise (II Kings 4:32- 37); the rain stop for three years and six months (James 5:17). The knee bent in prayer will keep the feet from running to evil. A humble heart of prayer will melt the fiery desire of temptation. In our text, Jesus is in the garden before His death, earnestly praying to His Father for strength. The cross was the greatest temptation Jesus faced. He had the power to destroy all those who sought to kill Him, but He chose to give His life a ransom. He overcame temptation through prayer.

The Lord will not allow you to be tempted beyond your ability to resist — provided we are watching and praying. “Pray without ceasing” (I Thessalonians 5:17) is an admonition to help us overcome temptation “without ceasing.” Constant vigilance and watchful care for those things that will tempt us with harm and the continued spirit of prayer will defeat temptation. “Be careful for nothing; but in everything by prayer and supplication with thanksgiving let your requests be made known unto God. And the peace of God, which passes all understanding, shall keep your hearts and minds through Christ Jesus” (Philippians 4:6-7).